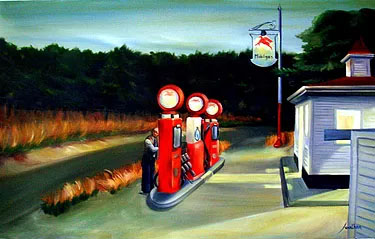 I was driving to the gym today and thought: “Gee whiz, I wish had time to get some gas.” With a longing gaze I passed East Side Gas, reading the sign posted in red above the gas prices: Full Service. I was enticed.Then on each of the gas pumps there was a paper sign pasted like an after-thought that read: No gas.

Then, as if Michael Levenson, Boston Globe Writer Extraordinaire overheard my thoughts — I scouted his headline in today’s paper: Prison hospital still awaits overhaul. The article emphasizes the changes and funding to implement the changes bequeathed by Deval Patrick, following the deaths  of 3 men — and how that funding was rescinded 3 weeks later.

Levenson says attention to the issue has returned because of  the recent suicide of a patient there,

Full Service/No Gas means you get promised something you’ll never get.  In our mental health care, Social Service, and Juvenile Justice System it means people die.

Levenson’s April first article on the current state of The Department of Children and Families quotes a child welfare worker who said:

“…emergencies that might have been preventable if I had more time to spend directly with parents and children…” and another who says: “…people here  from PTSD for fear that some thing bad could happen on our caseloads. The atmosphere is fear driven.”

You all know that The Childrens Behavioral Health Initiative (CBHI) is my pet peeve.

Well you don’t all know. So these great slides which were part of a fantastic presentation Dr. Keller gave at Cornell illustrate the story.

We won the case. Full service is mandated. But without the gas all we’re left with is the PTSD.