Warning: Creating default object from empty value in /home/customer/www/lisafliegel.bulletprooftherapist.com/public_html/wp-content/themes/pinnacle/themeoptions/redux/inc/class.redux_filesystem.php on line 29
 The Shit Show and the Shoah – Bulletproof Blog

You can’t tell someone else’s story you can only tell your own.

But me and J. our stories came together. Not suddenly by chance, but over time.

We rarely actually argued and he was too polite to roll his eyes at me but I could tell.

“I know you think I could never really understand you because I’m white.”

“You’re not white your Jewish –there’s a difference,” you replied.

Oddly enough, I began to take this as a complement.

Even after 10 years you’d only trust me so much. You’d pick and choose when to ask me for help. You always seemed to think that secrets were like some kind of bulletproof vest.

I could never convince you to the contrary that certain secrets will do you in.

When you called last December, not long after your 25th birthday, to tell me about the sewage overflow at the nursing home where you were working, I was proud of you for telling me about a crisis as it was happening, instead of after, when it was tool late to do anything about it.

It was a Sunday when you walked out. I called the Board of health, the police, inspectional services. They went in the next day –but you had already resigned, rather not be fired for refusing orders from the boss.

I started calling you my son years back because we’d go to store together a lot. I didn’t want them following you around the aisles or worse. So, we’d walk in to Dick’s Sporting Goods or CVS and I’d stop by the cashiers and say “Hi, I’m Lisa. This is my son J. don’t we look alike.”

Ha ha. We’d all have a good laugh and I’d buy you Noxema for your dry skin or Sensodyne toothpaste without incident. I tried to stick to the basics- but every now and then I’d indulge. You could really put the charm on when you needed a few bucks for Valentine’s day for your homegirl. Or to take your daughter to Legoland.

I met you a week before your 15th Birthday. Your guidance counselor and English teacher were worried. You’d missed so much school and it was only November. We met at the Victoria Diner. You wouldn’t order anything even though I was paying.

“Ok then I’ll get us the stuffed potato skins, but no bacon you see I’m Jewish and I keep kosher…”

“I know all about Kosher, from those Jewish mafia movies. The gangster’s daughters are always having kosher1 weddings, you know…”

Wise beyond your years; it was easy for people to forget you were just a kid. They’d already started stopping and frisking you when you were 10.

“Those cops, they were always feeling around. Touching my balls and shit.”

J’s a precisely, handsome young man- when he smiles it’s as if he’s unleashing the secret of his own good-looks.  But his anchor of resilience is his sense of humor.

He was almost 17 when we sat in the car waiting for his driving test “Quick, say something funny to calm me down.”

“Well that testing lady’s gonna get into my car and say: What’s this white lady doing in this car with this black kid?” She might think you carjacked me for the driving test. But I’ll say Nah it’s all good. He’s got a black mother and a white mother. A Christian momma and a Jewish one. I’m the white one in case you couldn’t tell.” 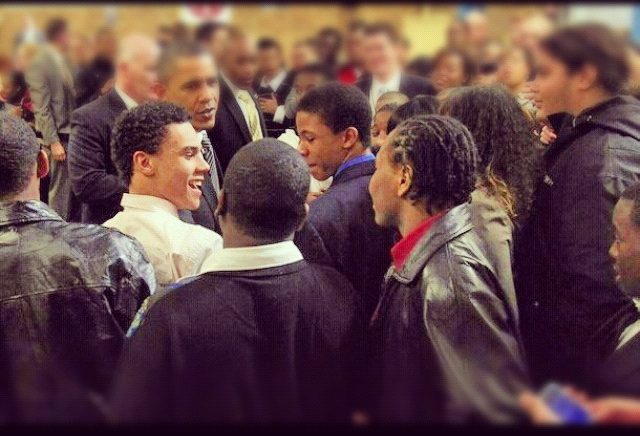 December 2012, we were driving from the high school to his doctor’s office; a clinic at the intersection of Blue Hill Avenue and Columbia Road in Dorchester Massachusetts, an intersection deemed a hotspot by the Boston Police Department because of its high rate of homicide, and violent crime.

I was listening to NPR’s broadcast following the massacre at the Sandy Hook elementary school.  President Obama’s was speaking at the memorial vigil in Newtown, Connecticut:

We gather here in memory of twenty beautiful children and six remarkable adults. They lost their lives in a school that could have been any school; in a quiet town, full of good and decent people that could be any town in America.

The president paused frequently, to gain his composure.

I was unprepared for cynicism in that moment, especially from J. who I know to be kind. We’d been working together long enough for him to recognize pained bewilderment on my face. By way of an explanation he said:

“N***as get shot every day, and no one gives a shit, but a bunch of white kids?  Blond hair and blue eyes and the whole world is crying. I hear they’re gonna make backpacks out of Kevlar- to protect white kids in their suburban schools. Seriously? N***as die everyday around here and I don’t see anyone bringing Kevlar backpacks to the hood.”

What, if anything, could I say? A seasoned, and street-wise trauma therapist, I was unprepared, overwhelmed by the magnitude of rage that appeared to drain J. of empathy. I was left with the thought: This is what happens to you when your life is just a series of betrayals. When the world tells you again and again how your life doesn’t matter.

We had this ritual whenever we’d say good-bye.