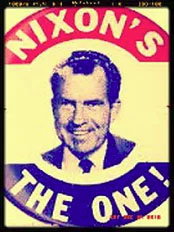 Nixon believed that-the civil rights movement went too far; that democrats were too lenient on communism-and were too liberal for America. President Richard Nixon despised social workers! He felt that they catered to the undeserving poor.  So imagine my surprise when I visited my friends at their Orthodox Jewish Day School and I saw locker doors swathed with bumper stickers declaring: “Nixon’s the one.” I received the explanation: “Nixon supports Israel, he’s good for the Jews.”

This confused me even more. I thought Jewish Values were clear cut, and that for a people whose religion was based on “Love they neighbor,” supporting a candidate that seemed to hate not just the neighbors, but the neighborhood as well, would not be palatable.

Now that I’m all grown up (really) my ideas about what it means to support Israel, and what is good for the Jews — would still not make it to those locker doors.

So here we are years later and I shamelessly support an American president not just because he loves his neighbors and the neighborhood; but because he is good for Israel and is good news for the Jews.

Nobody says it better than Gershom Gorenberg: “The policy of remaining in the territories and settling them is undoing the basic elements of statehood for Israel. Remaining in the territories has removed the principle of government by the governed, because you have a whole territory in which only part of the people participates in the government. It has removed the borders which are part of the definition of a modern state. Since so much of what has gone on in the territories has been in violation of Israel’s own laws, the policy undermines the rule of law. In short, it is taking Israel backwards.” (Interview with Magazine 972 in 2011)

So bravo Obama for the ‘no veto’ on the UN Security Council resolution condemning Israeli settlement construction. Bravo to Samantha Powers for her eloquence. Thank you for this good news for the Jews.

As for Donald Trump? Things are really desperate when I find myself thinking —  Nixon doesn’t look so bad right now!