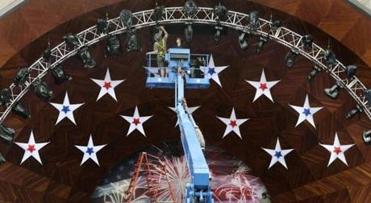 …Authorities have announced that there will be new security checkpoints on the Esplanade and tough new bans that will prohibit visitors from carrying in backpacks, coolers on wheels, cans, glass containers, premixed beverages, liquids greater than 2 liters, or any sharp objects. Boating traffic on the Charles River will be sharply limited as well.

Workers set the lighting on the facade of the Hatch Shell on Tuesday.

For a shaken public, though, vigilance can easily veer into paranoia, said Lisa Fliegel, a Boston-based trauma counselor who has worked with survivors of the Marathon bombings, as well as victims of gun violence in Dorchester and terrorism in Israel and Northern Ireland.

“The first thing we want people to do is distinguish between paranoia and vigilance,” she said. “Paranoia is you start to think everybody around you is a bomber and vigilance is you’re playing close attention to everything.”